I’ve been looking forward to this interview. See that green cover to the right with the clawed hand digging into the green ... stuff ... titled GNELFS? Yep, the author of that fascinating book agreed to be interviewed by me, and here we go!
Tell us all about Sidney. Go!
I’m a story teller. I just am. I have no pretension about that. I’ve been writing since I was a teenager and wrote my first trunk novel in college. I’ve written eight published books. I live in Texas with my wife, Christine. I’m now published by Crossroad Press, which is bringing out my young adult novels and my horror novels for adult readers in e-book form.
When was the last time you laughed and why?
Let’s see. It was probably at something, Ash, the court jester of our cats did.

A straightforward question, but a crucial one, why do you write?
I think at the base level it’s something genetic. My father was an imaginative storyteller, especially as a boy. He never wrote, but I inherited the creative streak from him. My mom was an English teacher, so I had that influence as well. I grew up somewhat isolated. I’m an only child, and I was the youngest kid in the neighborhood. I read a lot from a young age. I was read to by my maternal grandmother also. It’s a combination of all of those things that brought me to writing, working with my imagination. I tried not writing for a while, but I failed.

I'm curious, what method of book promotion has worked best for you?
I suppose Twitter has been pretty effective, and I’ve made some great friends there. I consider it kind of the writer’s water cooler. The same is true of Kindle Boards. Apparently having blood in the title of a book set in Louisiana is helpful also. My book Blood Hunter is my top seller. I’m in the process of reaching out to a lot of bloggers for my YA titles. I’m finding many want paper copies and kind of trying to tie-in giveaways of original mass market paperback editions of my young adult titles with those requests.
If you’ve had any, how do you deal with bad reviews?
Happily there haven’t been that many. I had one pretty rough one in Fangoria years ago and I get the occasional one-star critic on Amazon. When they happen, the best you can do is see if there’s anything valid. Let the rest go. I don’t think much of vicious reviews of anyone’s creative effort. Thoughtful analysis and criticism is something different, and I think is more worthwhile. On my blog I tend to write appreciations of works I really like.
So ... you write horror/mystery, and have an impressive five titles out on Kindle. Can you talk to us about your most recent release?
The newest is Scars and Candy, a collection of short stories written over a number of years and published together for the first time as an e-book from Crossroad. There are stories that appeared in Cemetery Dance, Plots With Guns, Blue Murder and other publications or e-zines plus some flash written for my blog and a couple of stories published for the first time. Some are quite dark pieces. Some maybe extreme. I come out of the eighties when I think everyone was interested in pushing the limits. You had Sam Kinison doing it in comedy, the Splatterpunks and hard R movies. I’m not always as dark now.
My YA novel, The Gift, is not extreme. It is one of those tales of building menace, and I’m quite proud of it. A young woman who’s had her heart broken gets a dollhouse from her father. It’s a misguided gift, but she decides to make the most of it. As she starts restoring the house, it begins to have strange impact on those around her. She has to dig into ancient books and unlock the mystery of the house’s origins to save her friends and loved ones. 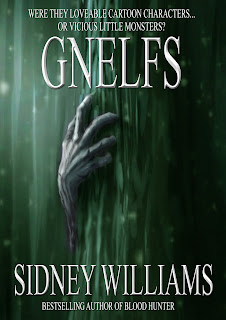 I just have to ask ... GNELFS? What does this book title mean, what’s the story behind it?
I saw a talk show in which a guy was warning that cartoons had evil symbols incorporated into their narratives. I started wondering what might happen if artists really had worked viable mystical symbols into cartoons for realism. I created Gnelfs, half-gnomes, half-elves, as the vehicle for that. It’s the story of a young girl named Heaven who comes under mystical attack. Her mother realizes the cartoons she loves may be a conduit and has to get to the bottom of who’s channeling the evil. She winds up being helped by a strange holy man, a paranormal investigator. They have to travel into a very mythic version of Hades to stop the attacks. I liked the challenge of taking something seemingly non-threatening and seeing what I could do with it. The Gnelfs are cartoon characters but there are mystical figures behind the activity. I found a real mythical underpinning and was able to work in a lot of Judeo-Christian material. The title may actually be a little misleading. It’s a dark fantasy or paranormal tale, and it kind of pushed the parameters of what the original publisher would let me do. It leaned a little more toward dark fantasy than many of their titles.
Let's wrap this up, any upcoming releases we should watch out for?
Two exciting things are coming fairly soon. One is a never before published thriller that Crossroads has plans for issuing as an e-book and as a trade paperback. It’s called Midnight Eyes. I wrote the first version in the nineties and had agent troubles, so it went in the trunk for a while. I found I had the juice to revisit it recently. I’ve revised it and updated it. It reflects a little of my post MFA vision. I earned an MFA from Goddard College recently. The Goddard College creative writing dojo’s brand of kung fu leans toward minimalism. I tightened the original book, really working to cut unnecessary words and passages. It’s the story of a small Louisiana city faced with a serial-killer type case. The sheriff’s son is former FBI special agent, now a consultant and professor. The two are estranged, but the sheriff has to call on his son for help. They have to mend fences and solve the murder, which, I hope, is a little more than just a killing spree story. A lot of plot strands tie together and build to the conclusion.
Also, my vampire novel Night Brothers is coming as an e-book from Crossroad. It’s the story of a vampire named Navarra who is trapped beneath running water for many years, until a drought frees her. She wakes up in the Louisiana forests and starts utilizing her abilities to control animals to protect herself. I had a lot of fun writing it. It’s got a lot of action, and it’s kind of old school, unstoppable vampire material.
I wrote three young adult novels as Michael August. The Gift that I mentioned and Deadly Delivery are out for Kindle and Nook etc., and the third is coming. It’s called New Year’s Evil. Then there are a couple more of my original novels and one more short story collection that will bring together science fiction, mystery and other genre stories. I’m also working on the audio dramatization of a classic children’s book.
Then I want to work on a couple of projects that might be termed literary fiction, though they will be spiritual cousins, in tone, to my backlist.
Thank you for taking the time to answer my questions!
You can connect with Sidney pretty much everywhere online, here are his links;
Website
Blog
Facebook
Twitter
Goodreads
Crossroad Press
Listmania
Says Miss Fletcher